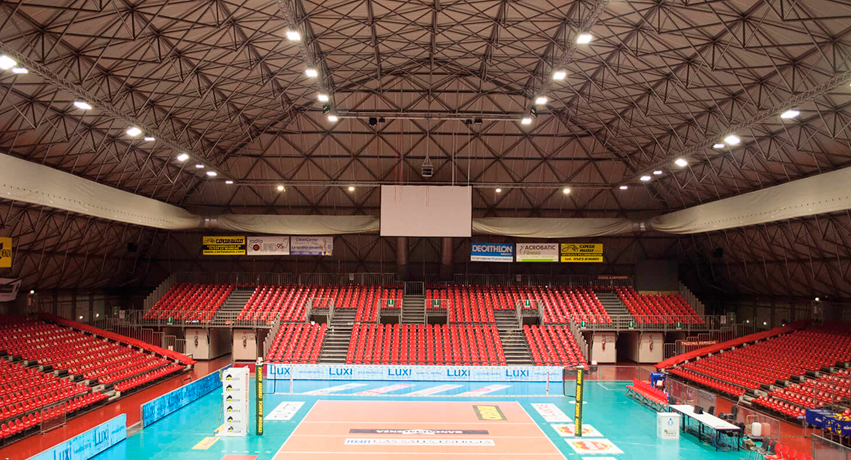 The PalaBanca is the main indoor arena of the city of Piacenza.

The structure was built in 2004 to host events, concerts and sporting events. It has a capacity of 3,700 seats and 6,000 standing places.

In 2018 the PalaBanca was subjected to restructuring and the lighting equipment of Luxi Illuminazione was chosen to renew the installation of the building and also to adapt it to facilitate television broadcasts of Serie A matches.

The model chosen is the Luxi LED projector of the VR 450W series capable of guaranteeing extremely high efficiency and resistance to humidity and dirt (IP66).

“The new managers and the municipal administration are particularly attentive to issues of environmental and energy sustainability” – explains Michele Granelli, director of Green Sales. “They wanted to intervene on a system consisting of obsolete lamps, combining the reduction of consumption and a high level of performance. In Luxi illumination we found the ideal partner, thanks to a technologically advanced product and a technical assistance service in first-rate design elaborations ».

“The new internal lighting system, in the design phase, took into serious consideration the quality of the lighting and the usability of the television footage. It will guarantee athletes and spectators a better visual comfort. The aim is to make the experience even more enveloping during the numerous events that the structure is destined to host.

This website uses cookies to improve your experience while you navigate through the website. Out of these, the cookies that are categorized as necessary are stored on your browser as they are essential for the working of basic functionalities of the website. We also use third-party cookies that help us analyze and understand how you use this website. These cookies will be stored in your browser only with your consent. You also have the option to opt-out of these cookies. But opting out of some of these cookies may affect your browsing experience.
Necessary Always Enabled
Necessary cookies are absolutely essential for the website to function properly. This category only includes cookies that ensures basic functionalities and security features of the website. These cookies do not store any personal information.
Non-necessary
Any cookies that may not be particularly necessary for the website to function and is used specifically to collect user personal data via analytics, ads, other embedded contents are termed as non-necessary cookies. It is mandatory to procure user consent prior to running these cookies on your website.
SAVE & ACCEPT